Dutch ovens have been used for centuries now, and they were brought to the United States by Lewis and Clark expedition in the 1800s.

If you’re not already using a Dutch oven, you don’t know what you have been missing so far. The heavy cooking pot that the Dutch oven is comes with a tightly fitting lid that is very efficient for braising. You can also use a Dutch oven for cooking stews and soup, and deep-frying as they take the extremely high heat. Versatile and long lasting, the Dutch oven can be used in campfires, barbecues, and ovens.

How to choose a Dutch oven?

Most Dutch ovens out there are made of cast iron, and you may use it either on the stovetop or in the oven. Keep in mind that you’re going to have to season a cast-iron Dutch oven, as opposed to cast iron cookware.

Some avoid the cast iron cookware as they think it’s difficult to clean. Even though this isn’t entirely true, you should take the overall maintenance under consideration. When you’re not taking good care of it, cast iron is most likely going to rust. 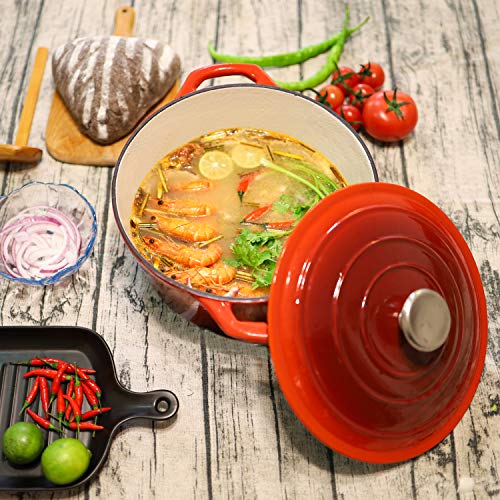 You can go ahead and get a Dutch oven that comes with enamel coating over the cast iron. you’re not going to worry about the cleaning nor the rust matter when using an enamel Dutch oven. There’s a catch to it, though. The enamel poses a risk for chip or crack. Also, the enamel inside is typically white, so it’s going to lose its color after some time. Giving it its pristine white color back is going to be impossible, for sure.

Once you get yourself a Dutch oven, you shouldn’t worry about the imperfections and the flaws, but rather keep in mind the amazing meals you cooked with it.

What are the main rules when using a Dutch oven?

Keep in mind that the cast iron is rather a lousy heat conductor, so it’s going to need plenty of time until it gets hot. On the other hand, once it gets hot, it’s going to stay that way for quite some time. This pot is great for braising meat. Once the liquid gets a gentle simmer, the pot isn’t going to need a lot of energy to maintain the temperature. This means that you’re going to be able to maintain the oven at a moderate temperature. As you’re approaching the end of cooking time, you may also turn it off as the food inside is going to keep on cooking.

A Dutch oven comes with a heavy lid, so you’re not going to lose liquid due to evaporation. The steam inside the pot is going to stay in there, continuing to soak your pot roast in a delicate, moist heat, turning your meat tender and juicy.

Be aware that a Dutch oven is going to sit on the heavyweight side, especially when full. Getting it and out of the oven isn’t going to be easy as you’re going to have to lean quite far forward to reach it. Add the hot matter into the equation, and you’re going to obtain the image of a hot pot that may raise some safety problems, especially if you’re not great with your upper body strength.

No matter the minor downsides, the Dutch oven is practically indestructible. You may also find models that are made for camping, with legs that raise them above the embers of the campfire. They also feature handles for hanging above the fire.

How to season a Dutch oven? 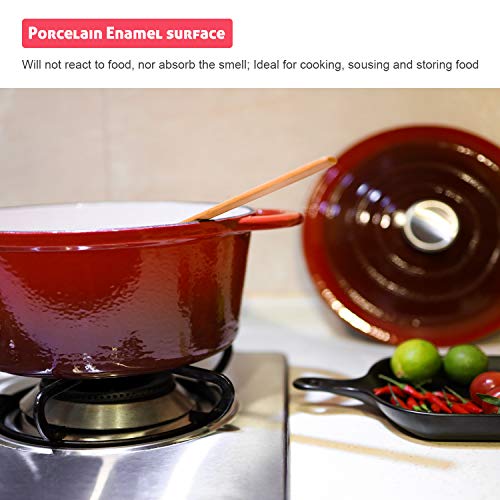 To prevent the Dutch oven from getting rusty, you need to season it when cooking. This is also going to create a non-stick surface, so scroll down for the steps you need to take:

It’s best that you do it outside as this part is going to get smoky. When you’re going to season indoor, you should turn on the oven fan and open the windows big.

Use only a bit of soap (mild dish soap) and rinse thoroughly. You may also use some steel wool, but it’s going to lead to discolorations in some areas. As for polishing, you should only use the polishing power tools specially made for the Dutch oven and only if you have to.

You need all the water to evaporate before seasoning so turn it over so that all water goes away. Use a towel to dry it out.

When you’re seasoning your Dutch oven, chances are it’s going to cause oil to drip. You should use a cookie sheet with aluminum foil for protecting the oven and place it on the lowest shelf of the oven.

Not everyone agrees on which is the best season for cast iron. no matter your final choice, make sure that there is no sour or bad taste in the cast iron. lard, olive oil, vegetable oil, vegetable shortening are the best choices for seasoning. Never use butter as it’s only going to burn and not season per se.

Turn the heat on (around 350F degrees), placing the Dutch oven upside down. You need the oil to fall out of the pot, which is going to create an even coating on the surface and not collect at the bottom of your Dutch oven.

Leave the Dutch oven in the stove/grill for 45 minutes, but no more than 1 hour. You should keep an eye on it from time to time. Even if it’s a safe pot to use, it’s still related to fire and smoke, so paycheck it any now and then.

Once you turn the oven off, you should leave the Dutch oven to sit for another 15-25 minutes. You need to let the oil to sit after you seasoned the pot. Grab some oven mitts for handling the Dutch oven as it’s going to be hot. However, you may also wait until the oven gets to the room temperature. It’s all about your planning.

Use a towel for removing any residual. This is going to help the Dutch oven shine again. The interior of the cast iron Dutch oven should look nice when is primed for cooking. It doesn’t matter the exterior as it’s going to get dull eventually, but its appearance does not affect whatsoever on the cooking.

The Pros & Cons You Never Knew when Buying a Latex Mattress